The pearl of the East is the city of Baku, which attracts people with its beauty and rich history. If this is your first Baku city tour, you are simply obligated to visit these places in order to understand this beautiful city, to see its history and to feel how two opposing cultures of West and East are uniting in something new. Our Baku city tour offers a selection of attractions and beautiful places in Baku. This list does not contain all the sights, but, undoubtedly, the most significant of them.

Icheri Sheher (literally – the Inner City, otherwise it is also called the Old City) – this is a historical and architectural reserve, where hundreds of monuments are located, and some of them are included in the UNESCO World Heritage List. While Baku city tour you can go to the Market Square and wander around souvenir and antique shops, carpet shops and crafts workshops. It is also worth seeing the Juma Mosque, the Museum of Miniature Books, the Bukhara Caravanserai, Multani Caravanserai, the Residence of the Baku Khans, the Bath of Agha Mikail and the Double Gate.

The Maiden’s Tower is the pearl of Azerbaijani architecture. Maiden’s Tower is an unusual and mysterious building with a halo of secrets and legends. The tower was built in two stages. The first presumably refers to the pre-Islamic era, and the inscription belongs to a later time, the XII century. Analogs in form were not found worldwide. Recently, the version about the involvement of the Maiden Tower in Zoroastrianism has been gaining more and more popularity. 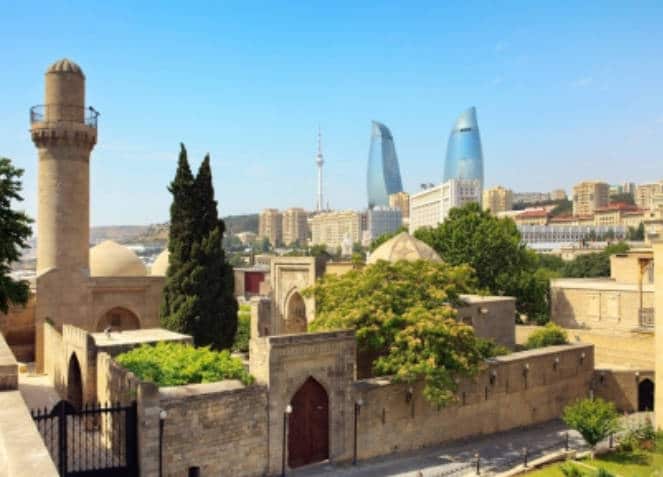 The Shirvanshahs Palace is the former residence of the rulers of Shirvan. In addition to the palace itself, the complex includes the courtyard of Divan Khan, the tomb of the Shirvanshahs, the palace mosque with a minaret, the bathhouse and the mausoleum of the court scholar Seyid Yahya Bakuvi. The construction of the complex dates back to the XIII-XVI centuries. The construction of the palace was associated with the transfer of the state capital of the Shirvanshahs from Shamakhi to Baku. In 2000, it was included in the UNESCO World Heritage List. 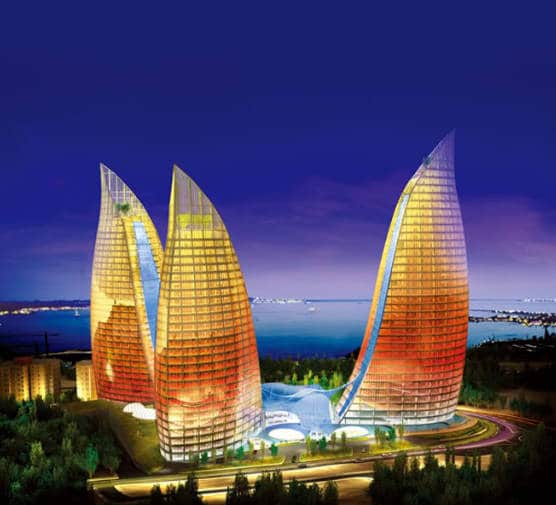 Flame Towers (Flame Towers) – the highest buildings in Azerbaijan, which are located in the capital, so you can see it on the Baku city tour. The towers are reminiscent of three flames of the tongue, which are successfully combined with the emblem of Baku, which also depicts three flames of fire. The towers themselves are completely covered with LED screens that display the movement of fire, visible from the farthest points of the city. The effect of gigantic torches is visually created, which emphasizes the basic idea of the towers, which lies in their name. 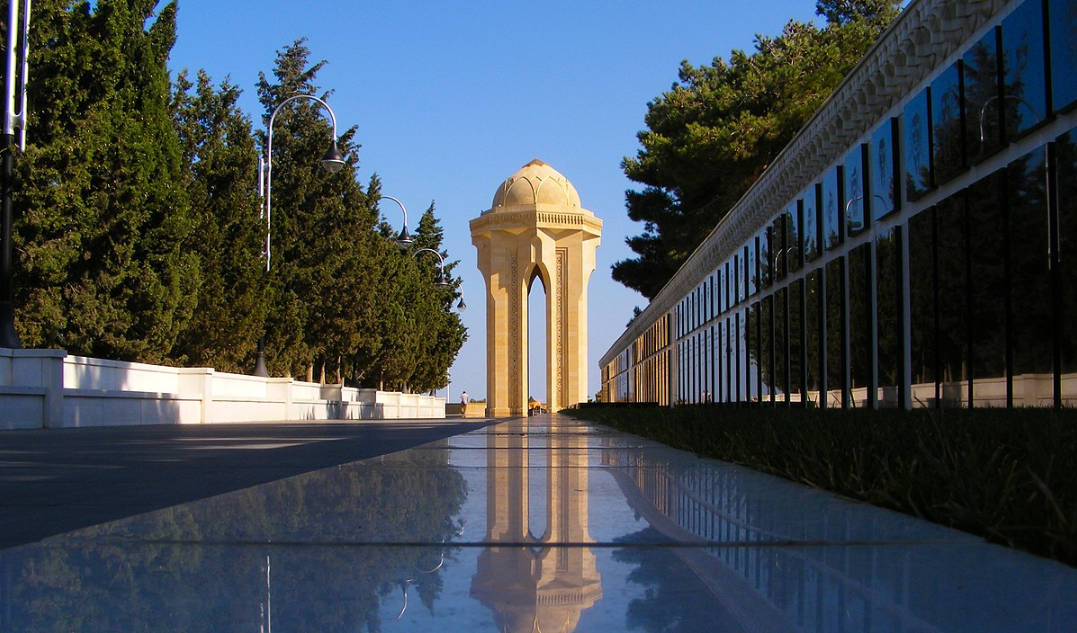 Martyrs’ Alley is the place where the victims of the terrible Black January tragedy (126 people) and the Azerbaijanis are buried. There is also an unnamed grave in the Alley, in which the unidentified bodies of the slain are buried. Every year on January 20, people come to the Alley of Martyrs from all over Azerbaijan to honor the memory of the heroes.

The Azerbaijan Carpet Museum – the largest collection of unique carpets that Azerbaijan is so famous for, is collected in this place. That is why this place is one of the must-see museums of the Baku city tour. The museum is a treasury of Azerbaijani national culture, showing the carpet in close interconnection with other types of the traditional art of Azerbaijan. His collection contains approximately 14,000 carpets, embroidery, clothing, copper-clad products, jewelry, contemporary works of glass, wood, felt. 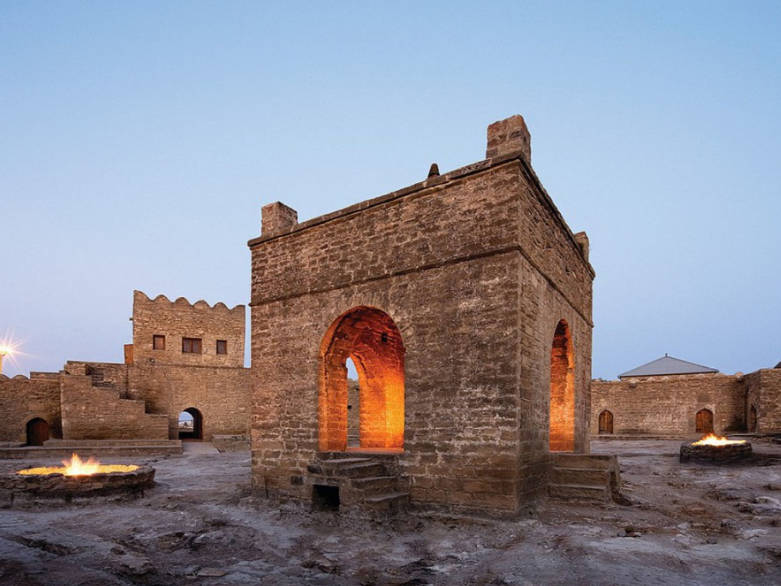 Ateshgah – Temple of the Eternal Flame, located outside the city, 30 km from the center of Baku. All tourists should see it while Baku city tour because this is the “visiting card” of the country and real Azerbaijani exotic. Since time immemorial, this place where the gas entering the surface comes into contact with oxygen and spontaneously ignites has been revered as sacred by Zoroastrians (fire worshipers). 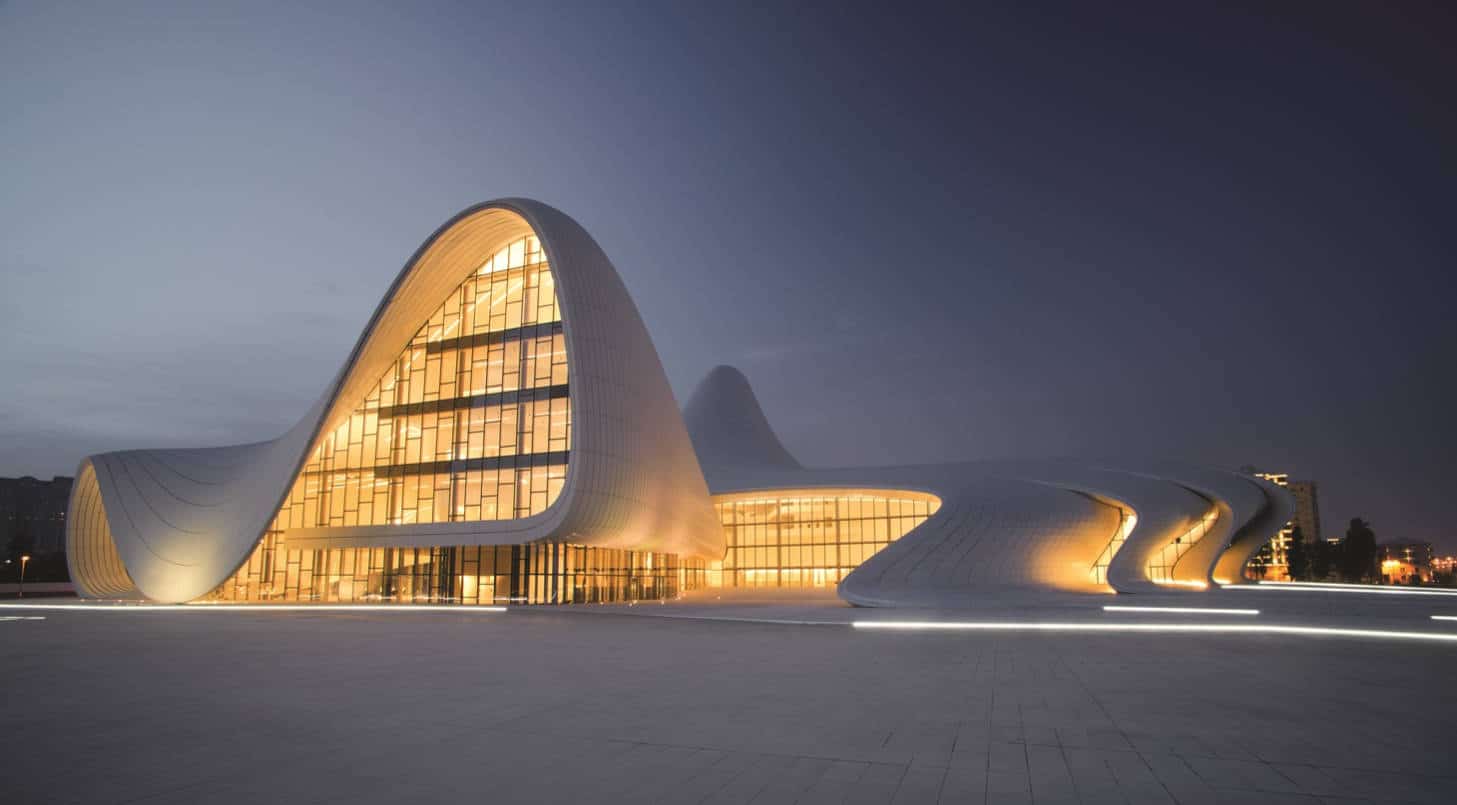 Heydar Aliyev Center is a cultural center built on Heydar Aliyev Avenue in Baku. It is a complex building, which includes an auditorium, a museum, exhibition halls, administrative offices. The design of the center was developed in 2007 by architect Zaha Hadid. The shape of the building is a wave-like aspiration upward and a smooth merger with the ground. The Heydar Aliyev Cultural Center has become a new symbol of modern Baku. 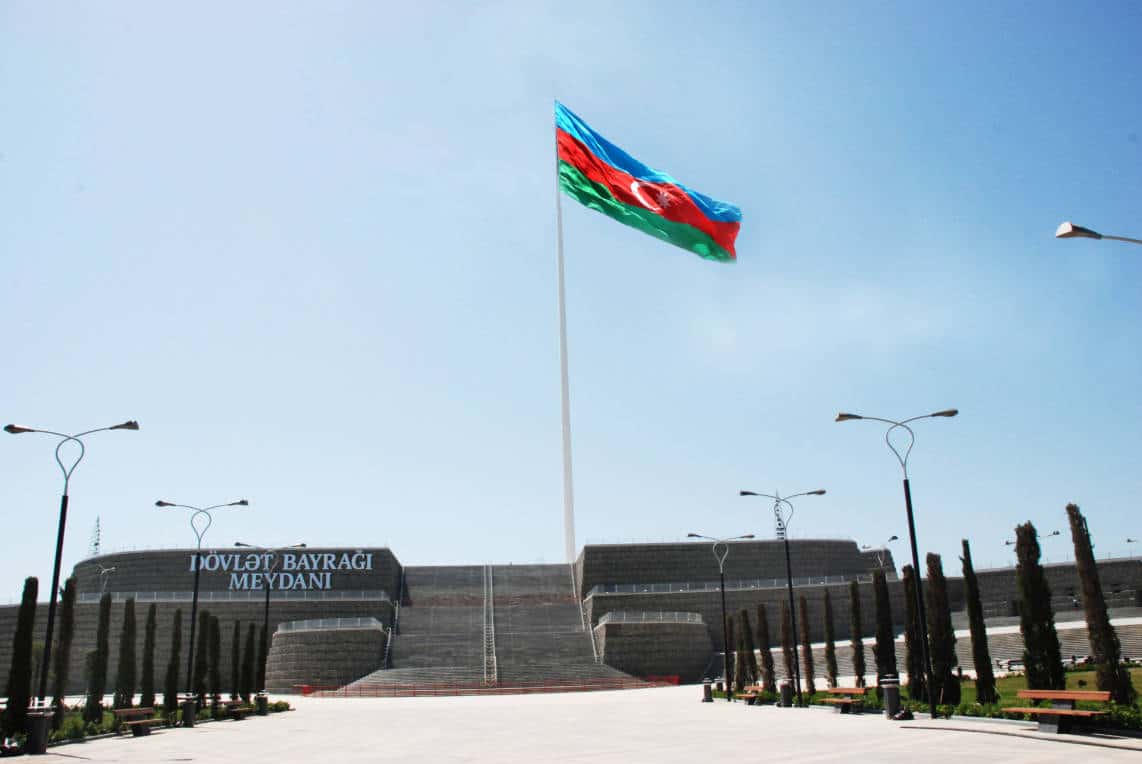 State Flag Square – the national flag of the Republic of Azerbaijan is located here.The state symbols are also depicted on the square – the coat of arms, the text of the anthem and a map of Azerbaijan made of gilded bronze and the State Flag Museum were created. 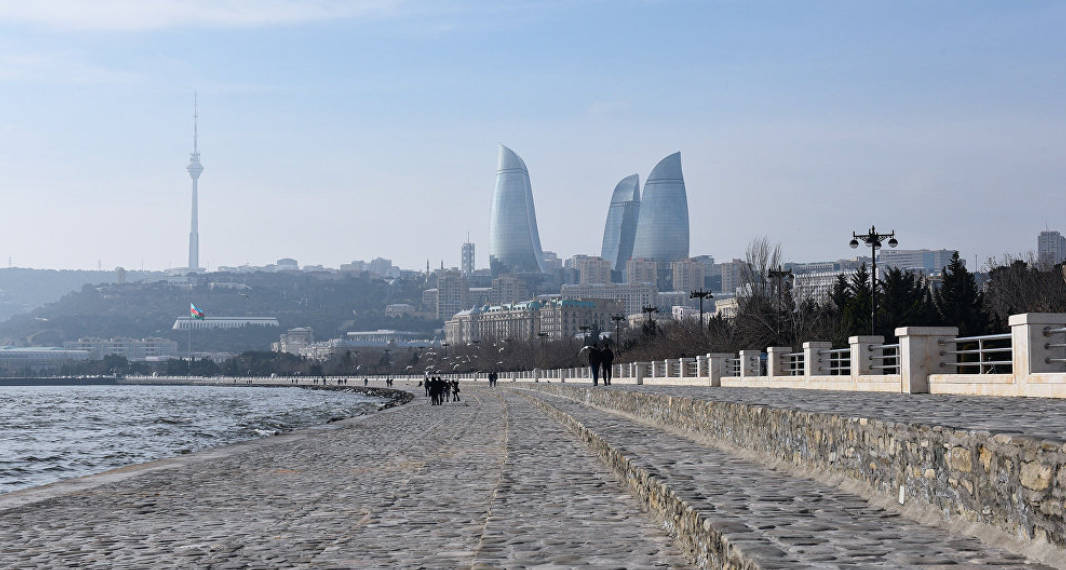 Baku Seaside Boulevard is a business card and symbol of Baku, located on the shores of the Caspian Sea. A favorite vacation spot, both tourists who visit Baku city tour and locals. In 2009, it celebrated its 100th anniversary. The length of the park before reconstruction was 16 kilometers, and after a general reconstruction is 25 km. 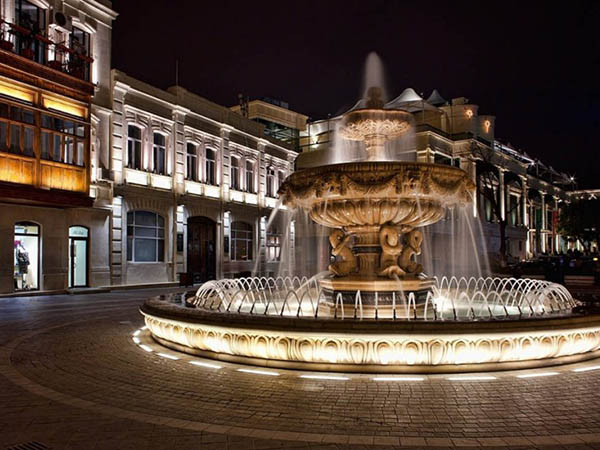 Fountain Square is the first city square in Baku. Around the square are architectural monuments of the 19th and 20th centuries, among which it is worth noting the building of the Nizami Museum. In addition to a variety of fountains, there are a large number of sculptures on the square depicting city dwellers engaged in everyday activities. 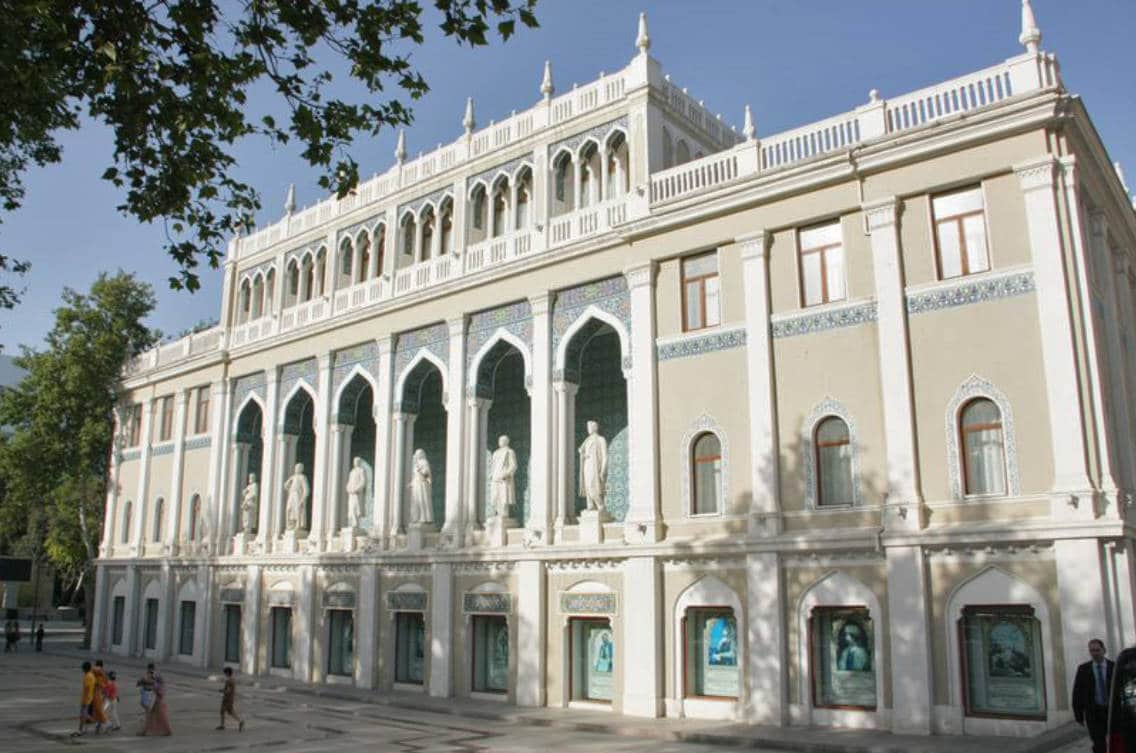 Museum of Azerbaijani Literature named after Nizami Ganjavi – founded in Baku in 1939. It is located in the center of the capital of Azerbaijan, near the Fountains Square and the entrance to Icheri Sheher. Today this museum is one of the largest and richest treasures of Azerbaijani spiritual culture. On the facade of the building, along the axis of the arches, statues of outstanding poets and writers of Azerbaijan are installed, among them: Muhammad Fizuli, Molla Panah Vagif, Mirza Fatali Akhundov, Khurshidbanu Natavan, Jalil Mammadkulizade, and Jafar Jabbarli. 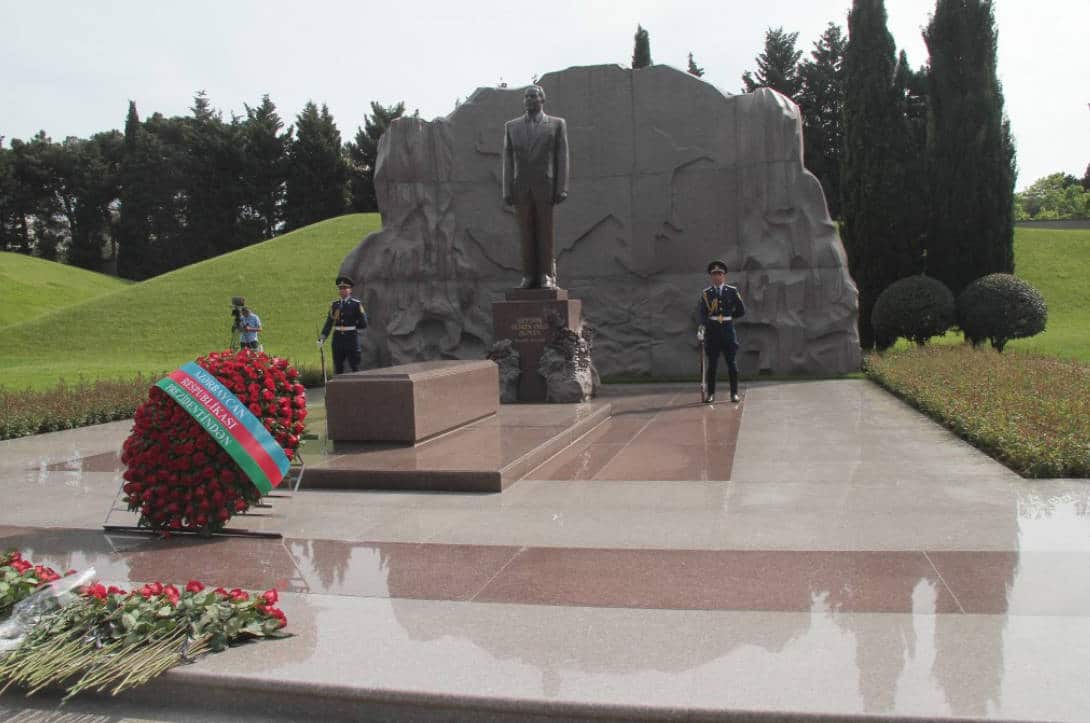 Honorary Burial Alley – a cemetery located in the upland part of Baku in the form of an alley. Prominent Azerbaijani cultural, science, literature, art, Heroes of the Soviet Union, politicians, revolutionaries, as well as distinguished themselves in various fields of economy and agriculture and deserving honorary titles are buried here. 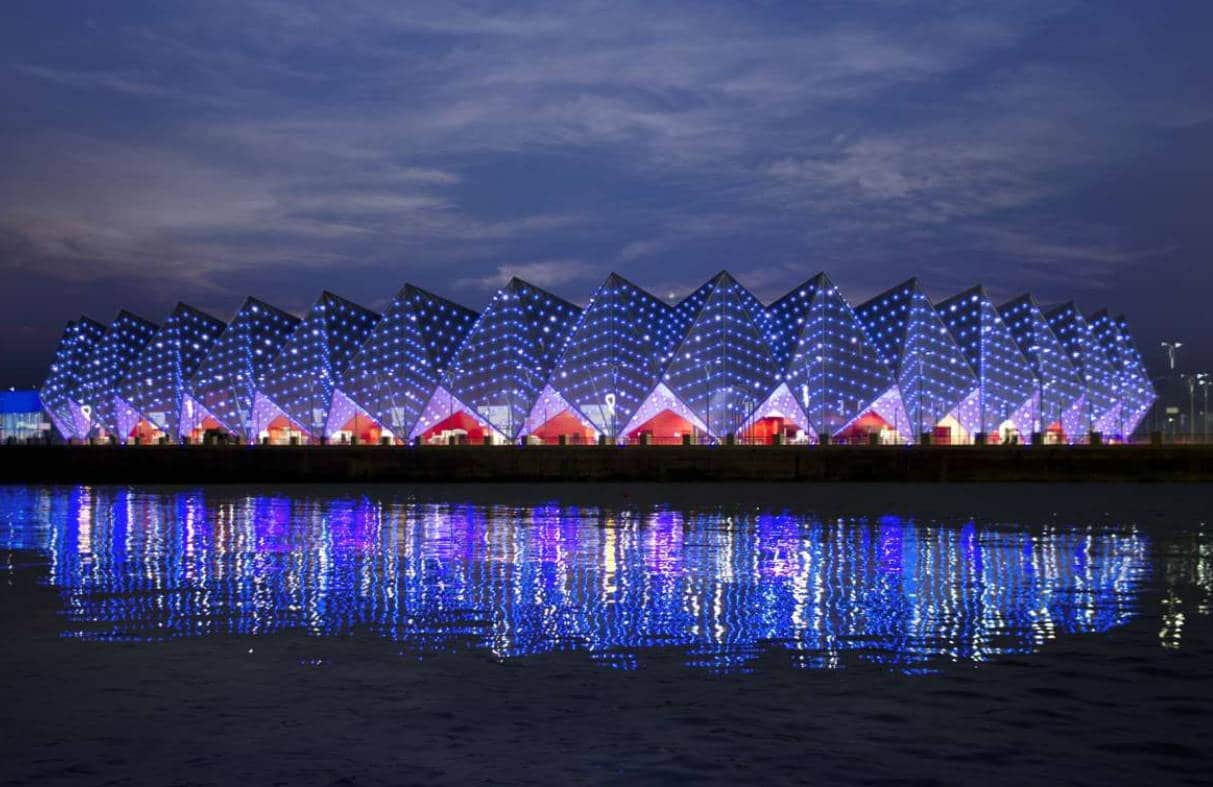 Baku Crystal Hall (“Baku Crystal Hall”) is a sports and concert complex built on the state flag square in Baku, designed for international cultural events where you can see while Baku city tour. It was here that the Eurovision Song Contest was held in 2012. 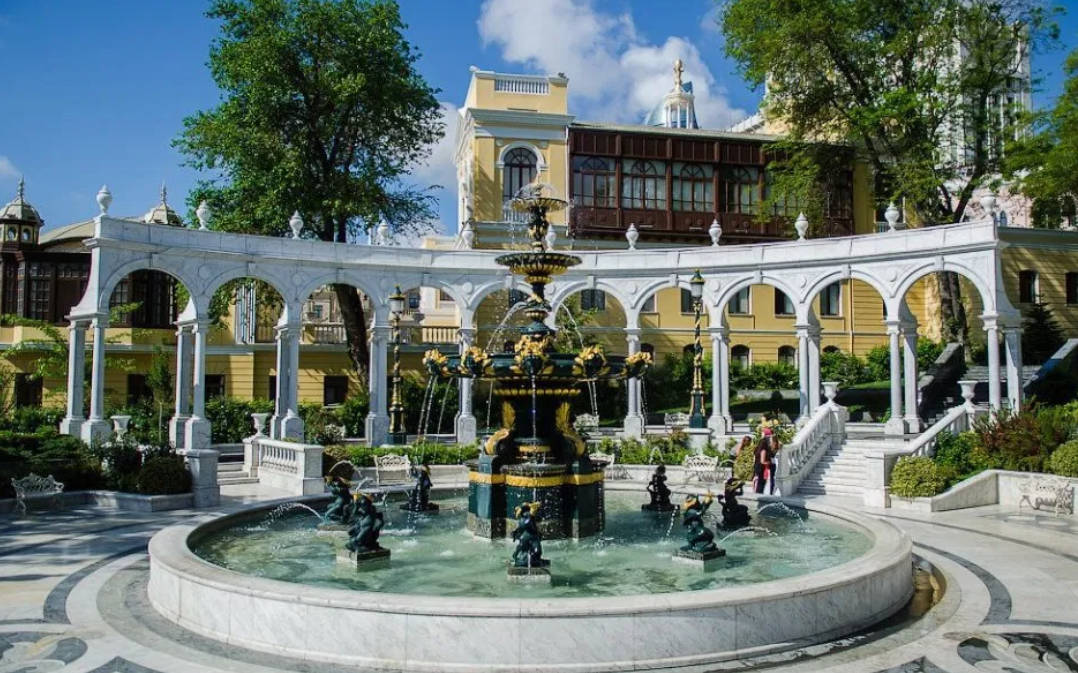 The Governor’s Garden is one of the oldest parks in the capital of Azerbaijan.Now called the Philharmonic Garden, the Muslim Magomayev Philharmonic Hall is located here. Located near the Icheri Sheher fortress. 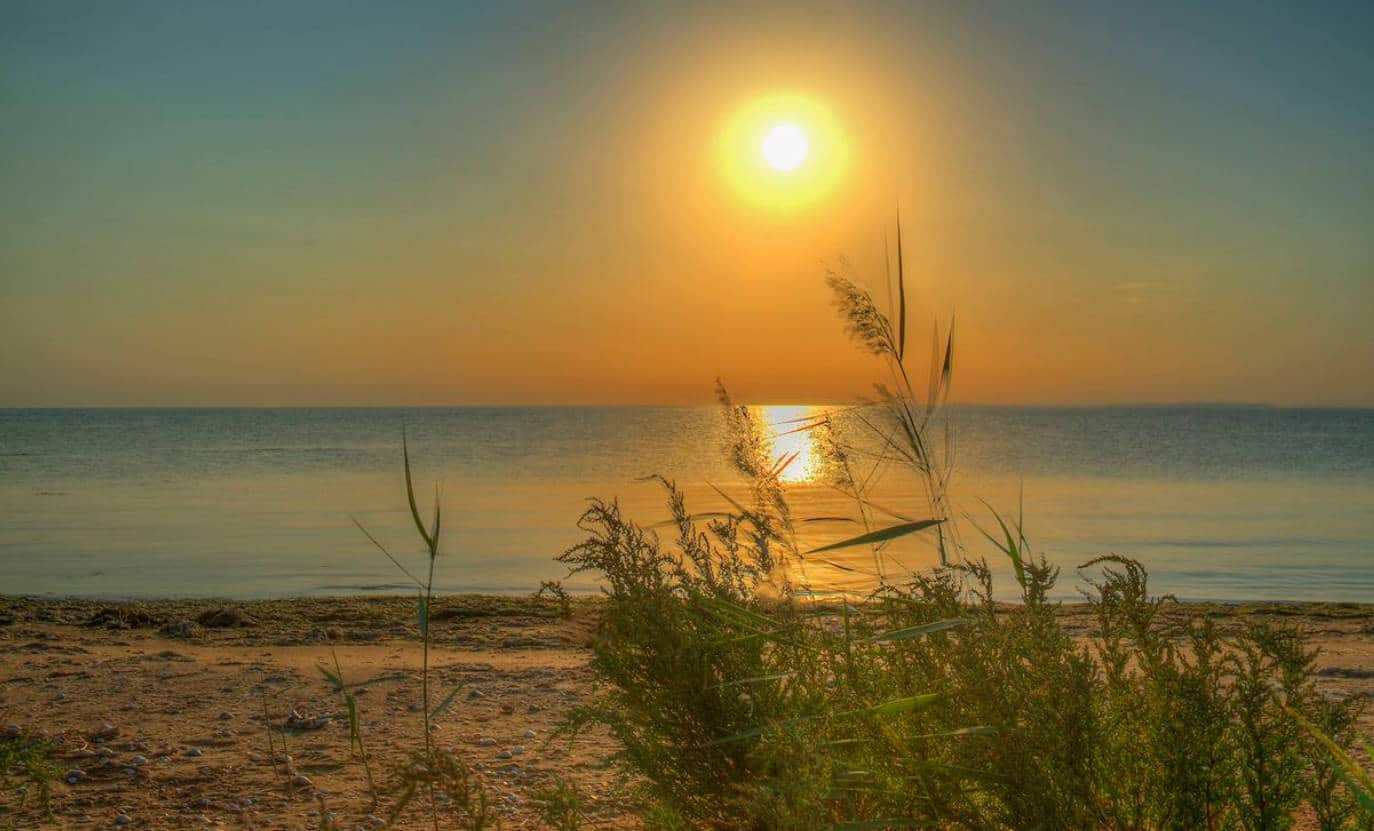 Absheron National Park – was created from the Absheron State Wildlife Refuge in 2005. The purpose of its creation was the preservation of gazelles, Caspian seals, and waterfowl living in this territory. It is located in Azerbaijan, on the territory of the Azizbek district of Baku. The area of the park is 783 hectares. 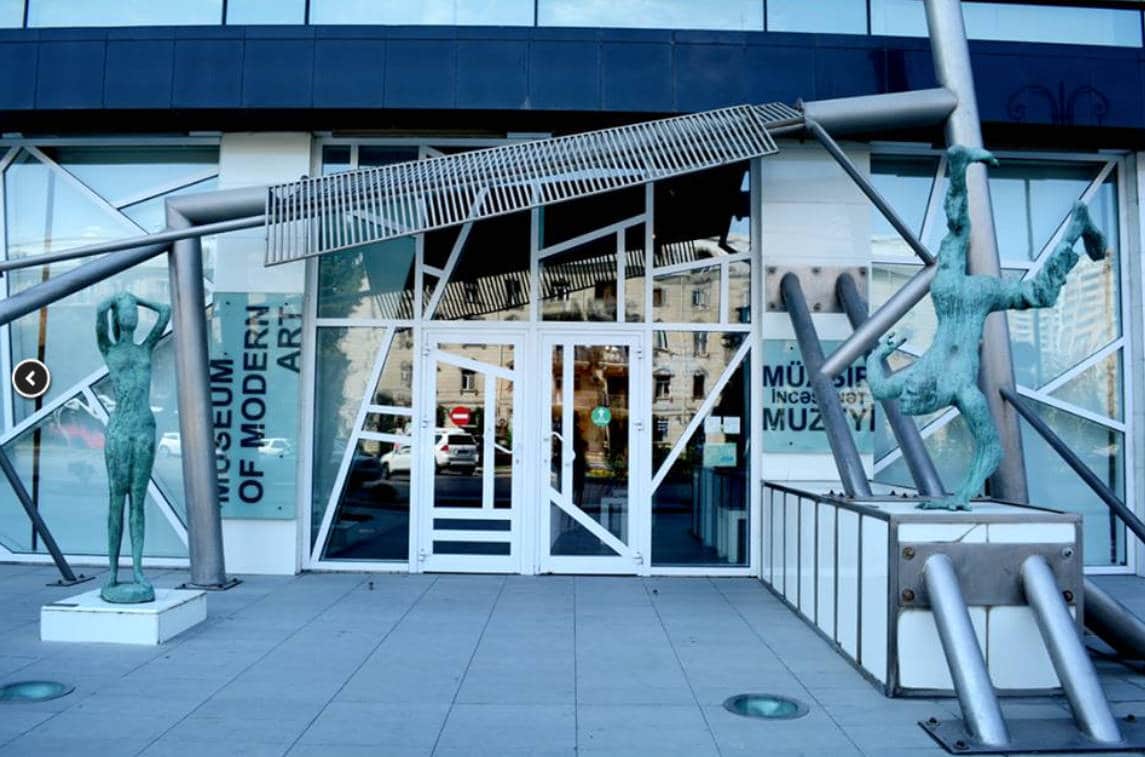 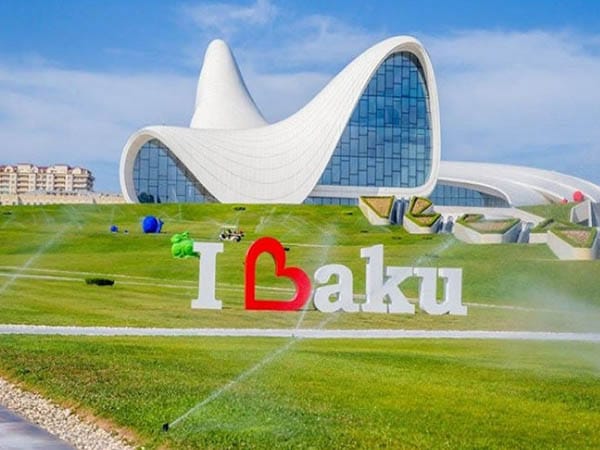 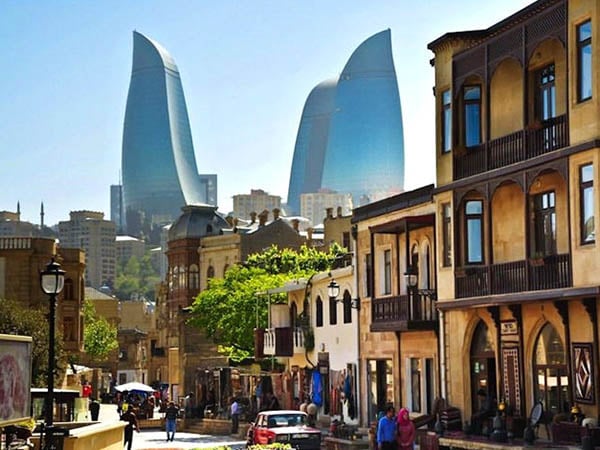